The Frogmore Papers is one of my favourite poetry magazines. In fact, it's accompanied me pretty much throughout my poetic life. Looking back through my records before writing this blog post, I noticed I first had a poem in its pages in Issue 57 back in 2001. That was followed by another in Issue 68 (2006), a third in Issue 76 (2010) and two more in Issue 81 (2013).

Jeremy Page, as well as being the journal's founder and long-time editor, is also an excellent poet, so it's a privilege whenever he chooses my work for publication. As a consequence, I'm especially pleased to have a further two poems in the brand-new commemorative 100th issue alongside the likes of Simon Armitage.

You can get hold of a copy for yourself at The Frogmore Press website (see this link), but here's the gorgeous cover by way of a taster... 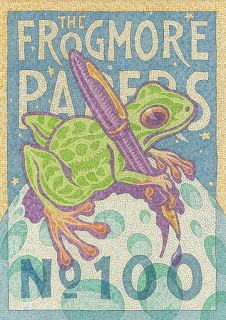 Posted by Matthew Stewart at 01:59 No comments:

My review of The Kentish Rebellion at The Friday Poem

Does this sound familiar in the current political climate...?

‘Selby hints at the presence of decline, at the role of that decline in generating rebellion and confrontation, at how leaders attempt to manipulate the masses, and how this issue pervades both the past and the present.’

My review of Robert Selby's The Kentish Rebellion is now up at The Friday Poem and you can read it in full via this link.
Posted by Matthew Stewart at 01:10 No comments:

My review of Glut at Wild Court

My review of Glut, Ramona Herdman's new collection from Nine Arches Press, is now up at Wild Court. You can read it in full via this link, but here's a snippet to whet your appetite...

‘Many poets in the past have identified the hyphen as a useful device, but few have delved so deeply into its powers, the hyphen as hinge to a door between two previously separate words that leads into a highly personal aesthetic...’
Posted by Matthew Stewart at 02:38 No comments:

The dishes I most enjoy are cooked by chefs who demonstrate an understanding of how flavours and textures work together, a subjective understanding, of course, that coincides with mine. From the first mouthful, I know we’re on a similar wavelength. And the same goes for poetry. Within a stanza, I know whether a poet has a certain feeling for a line, a cadence, a sentence, that I also share.

In both cases, food and poetry, there’s always a delight in making unexpected discoveries, either at a backstreet tapas bar or from a small press publisher. One such example is Paul Ings’ first pamphlet, One Week, One Span of Human Life (Alien Buddha Press, 2022). This title might give certain readers the erroneous impression that the work inside might be abstract or metaphysical. However, it simply serves to indicate the pamphlet’s structure, which follows the course of a week.

The key moment, however, was when I started on the poetry itself. By way of example, I’m delighted to have been granted permission to reproduce the following poem in its entirety, as shorter quotes wouldn’t do justice to its gradual, subtle, cumulative effects:

After an Hour of Walking Sheer Clifftops

there’s this reluctant beach has its back turned towards us;
as we peer down through bracken mesh up on high
it makes like it’s not there in its shady surround
but we’ve spied it and we’re coming down.

Our discovery has an unassuming, laid back manner
of nonchalance in its expulsion of us;
water laps yet again at our retreating toes
till we’re all backed up against the cliff before we know it

where we throw in the towel; but as we climb
and as the awkward terrain occasionally allows
we cast glances back down at what is now
a bay of frothing mashing waves contained

within its vessel; so vast and uncompromising this view
that I only happen to glance at my slapping sandaled feet
and the young adder so discreet that it merely laps
wavelets at my toes passing off amongst ferns.

Throughout this poem, an awareness of form is latent in the background, giving the initial impression that its long lines are relaxed and free, when in fact the poet has a close eye on syllables and stresses, alongside a keen awareness of the role of line endings. Moreover, Ings’ ear for natural language means that the poem wears his craft lightly, inviting us along with its speaker, never dictating, never overreaching, never lapsing into poetic preening, allowing rhyme and half-rhyme to merge into the background.

As mentioned above, Paul Ings’ work has been a lovely discovery for me. You never know what tapas you might find off the beaten track, and the same goes for poems too!

Posted by Matthew Stewart at 00:49 No comments:

A letter to an Oxfam Bookshop customer

I doubt I’ll ever know your name or face, but I do know that you visited the Oxfam Bookshop in Chichester at some point between Easter and August this year, pulled my book, The Knives of Villalejo, from the shelf in the Poetry section, and decided to buy it. I’m left to imagine you browsing, picking it up and flicking through the pages, perhaps pausing to skim-read a poem or two before taking the plunge, maybe wondered who Camilla might be (the person to whom I dedicated this copy of my book when it began its first stab at life).

I only discovered my collection had gone when I visited the shop last month, checked its old spot, and found it had vanished. It was no longer sitting in its slot under S for Stewart between other books that used to accompany it and are still left waiting to be chosen (see picture below!). 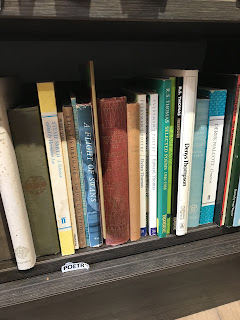 There’s a thrill to giving a book a new owner, another reader, and I hope you’ve enjoyed your copy. The unanswerable question now, of course, is whether you’ll keep it, go back to it or even let it go again in due course to another charity shop. For now though, I’d simply like to thank you for granting it a second chance.

All the best in a shared love of poetry,

Posted by Matthew Stewart at 23:44 No comments:

A selection of Evangeline Paterson's poetry on The High Window

A few months back, The High Window commissioned me to curate a selection of Evangeline Paterson's poetry. The result is the feature (see here) that's now been published. I do hope you enjoy Evangeline's work. She's an unjustly neglected poet who warrants serious re-evaluation...

Posted by Matthew Stewart at 03:04 No comments:

Christopher James' The Storm in the Piano

My review of Christopher James' new pamphlet, The Storm in the Piano (Maytree Press, 2022), is up today at The Friday Poem. You can read it in full at this link, but here's a short extract as a taster
Whether using the first or third person, the poet stands far further behind these poems than is common these days, thus avoiding any temptation to conflate the poet and the narrator. Dramatic set piece after dramatic set piece, Christopher James invites us into his vast array of worlds via an aesthetic approach that feels pretty much unique in the context of contemporary UK poetry.

In a juster world, Christopher James' books books would sell in thousands...

Posted by Matthew Stewart at 01:33 No comments: