On the back of a large petition and numerous complaints from major figures in the poetry world, I'm delighted to report that the National Poetry Library have today announced that they have decided to suspend the planned launch of the new membership scheme for next week (see here).

Instead, they intend to consult the poetry community as to how they might raise the funds that they require to keep growing. This is, of course, excellent news, and I personally would suggest that they have scope to build a far stronger annual programme of readings, events, courses and workshops than at present without stepping on anyone's toes, simply by making the most of their terrific location. Sponsorship, meanwhile, is an additional option that might be worth considering if it helps keep the library free to join.

Fingers crossed that this unfortunate episode might in the end lead to the strengthening of such a valuable resource for U.K. poetry...
Posted by Matthew Stewart at 13:49 No comments:

Back in the 1990s, the National Poetry Library was a lifeline to me. I'd take the train up to London for the day on every trip over from Spain and cram in as many hours as possible in the South Bank Centre, poring over the latest issues of poetry magazines. I never spoke to anybody, but the mere fact that others were sitting there doing the same thing, with similar tastes and attitudes, seemed miraculous and made me feel far less alone.

And I know of many others who can tell similar stories. All capital cities are tough places for young people to live in, especially for newcomers who are often strapped for cash, and the National Poetry Library has long provided a safety net for countless poets who are just setting out, reassuring them that poetry is a welcoming, inclusive genre. I still feel I belong there as soon as I step through its doors.

For these reasons, I'm especially upset to learn today via social media and the National Poetry Library website that they plan to launch a new paid-for membership package that means new members will have to pay for the privilege of borrowing books from 2nd October onwards. Of course, there's an inevitable reminder that the mags and collections, etc, will still be free to browse. However, I can only say that such a membership model might well have put me off going in for the first time all those years ago, and I'm convinced it will have the same miserable effect on others if it is implemented in the future.

I can only express dismay that the National Poetry Library should be feeling "excited about this new option" as they claim on their Twitter feed. Here's hoping they backtrack in the face of growing criticism over the coming days from luminaries who are capable of exerting far more pressure than me...
Posted by Matthew Stewart at 14:52 No comments:

With featured readings from Rory Waterman, Katy Evans-Bush, Ramona Herdman, Rishi Dastidar, Mat Riches and myself, plus support from Robin Houghton, Neil Elder and Clarissa Aykroyd, the second Rogue Strands Poetry Reading is up and running!

It would be a huge understatement to mention I'm chuffed that my co-organiser (Mat Riches) and I should have managed to bring the above-mentioned line-up together. In fact, I'd go as far as claiming we'll provide an excellent snapshot of some of the best poetry around on the U.K. scene when they read at the King and Queen pub in Foley Street, London W1W 6DL on 28th November, where events will kick off at 7.30 p.m..

There's a Facebook page for the reading (see here) where you can keep up with our news, while I'll also be posting a top-notch poem from each of our poets on Rogue Strands as we get nearer the time.

Oh, and Mat Riches has produced this excellent poster. Please feel more than free to share it on social media and help us generate the audience on 28th November that our poets so richly deserve... 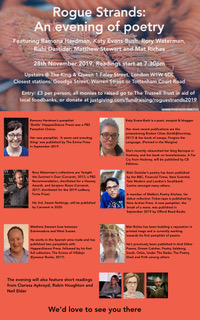 Poetry in Aldeburgh have just published their programme for the 2019 festival (8th-10th November), and it's exceptional (see here). Not only is it richly diverse and littered with famous names, but it also features some excellent poets who sometimes don't receive the recognition that they deserve, such as Charlotte Gann and Oliver Comins, both of whom have featured on Rogue Strands over the past few months.

I wish I could attend myself, but I'm already committed to three events later on that month in Birmingham, Oxford and London (more news in due course) and I can't manage two trips over in such quick succession. However, following last year's amazing experience in Aldeburgh, I can only recommend a visit to the festival if you're closer than I am...!
Posted by Matthew Stewart at 00:15 No comments: