Very pleased to have a new poem in issue 24 of Scintilla, The Journal of the Vaughan Association. I'm in excellent company alongside poets such as Roger Garfitt, Jeremy Hooker and Rosie Jackson... 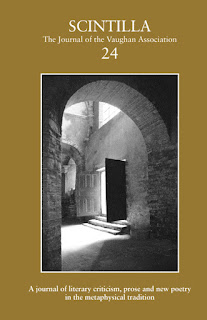 Posted by Matthew Stewart at 00:42 No comments:

Talking to you, Meg Cox's A Square of Sunlight

On a first skim through Meg Cox’s first full collection, A Square of Sunlight (Smith-Doorstep, 2021), it’s inevitable and natural that most eyes should focus on her exceptional rhyming poems. These poetic earworms combine wit and musicality, and lodge in the reader’s mind with ease, as in the ending to ‘The Third Person in the Marriage’:

…You said we were finished. But that can’t be true –
it can’t be too late for us – I really love you.
And what has she got, that woman, I’ve not?
Just his kids, a house, my lover. The lot.

These poems will probably become her signature pieces. Not only are they eminently quotable, but a certain unexpected inevitability to their cadences and structures runs through them via her imperceptible heightening of the natural flow of language.

However, it would be a crass mistake for readers and critics to pigeonhole Meg Cox’s work, as this collection offers evidence of a more wide-ranging talent. Cox is capable of adopting and adapting a variety of poetic techniques while binding them together via a cohesive approach to both writing and life.

One such example is the following extract from ‘Cowlick’:

…One cow is licking her calf’s ear,
thoroughly and roughly,
and the calf’s head is turned
to one side, reluctant but compliant
and I recognise my mother
washing my ears and behind my ears
and my head turned at just that angle
with a flannel as coarse as a cow’s tongue.

An initial comparison with ‘The Third Person in the Marriage’ might reveal superficial differences in technique in terms of rhyme and metrics, while this second poem also showcases a delicious poetic leap from the cow to the human that’s then capped off by a terrific simile. Nevertheless, both poems share qualities. These include turns of phrase that startle but then feel just right, alongside acute observation of the dynamics of relationships.

The poems in this book are brave. There’s a co-existence of a huge zest for life with an awareness of the ageing process to such an extent that it’s impossible to read the collection without being infected with an urge to make the most of life. And then there’s Cox’s embracing and subverting of poetic influences to layer them with her own idiosyncrasies, as in ‘Marmalade’…

There’s a pot of your dark orange marmalade in my cupboard,
still unopened. It lasts a long time but I might never open it now.
The last time you gave me some jars I asked how much
you’d made and you said enough to see us out…

This poem doesn’t hide from its connection with Larkin’s ‘An April Sunday brings the snow’. Instead, it takes his male, filial perspective and filters it through an intensely female view of friendship.

In other words, Meg Cox’s poetry is a joy. Whether savoured in sips or gulped down in one, A Square of Sunlight is an excellent read. As mentioned above, it will probably lodge in people’s minds thanks to its excellent rhyming pieces. However, the collection’s greatest value perhaps lies in Cox’s diction. It’s claimed that the best radio presenters manage to speak as if addressing a single person, striking up a conversation, making the addressee feel special and unique, as if the presenter in question is talking only to them. Few poets achieve such an effect, but Meg Cox does so. Get hold of her book and let her talk to you too…

Posted by Matthew Stewart at 01:28 No comments:

Email ThisBlogThis!Share to TwitterShare to FacebookShare to Pinterest
Labels: A Square of Sunlight, Meg Cox, Smith-Doorstep

I'm on The Friday Poem!

I'm absolutely delighted to report that my poem, Las Cigüeñas, is The Friday Poem today (you can read it by following this link). Very grateful to the editor, Hilary Menos, for the chance to take part in this exciting new project.

Moreover, you might be interested to note that their submissions are now open if you'd like to see your poem in due course where mine appears today...!

Posted by Matthew Stewart at 03:33 No comments:

A celebration of travel, John Greening's and Stuart Henson's A Postcard To

A Postcard To (Red Squirrel Press, 2021) is an unusual collection for many reasons. To start with, there are the obvious ones, such as the fact that it’s co-authored by two poets – John Greening and Stuart Henson – as the book is comprised of their sonnets initially written on postcards to each other over the past twenty-five years. And then there’s the innovative format: pages are turned horizontal to imitate those afore-mentioned postcards. The consequent, ingenious marriage of formats is surprising and pleasing to the mind and eye.

However, A Postcard To is also unusual in more subtle ways. First off, its focus on personal, social and literary history is acute. Even the format itself – the postcards in question – is an artefact that’s rooted in the 20th Century, halfway between letters and WhatsApps. In this context, the poets not only show awareness of epistolatory traditions, but they also choose an ideal length of poem for their postcards, 14 lines lines just squeezing on to the available surface.

In terms of contents, meanwhile, that afore-mentioned consciousness of the individual’s place in history becomes clear once more. If these postcards are written while the poets are on trips, they inevitably coincide with counterpoints to their everyday experiences. As such, of course, they serve as celebrations of the act of travel, and feel even more significant during this pandemic that inhibits our movements so much. One such example can be found in the closing lines to Stuart Henson’s ‘Cranes Above Florence’:

…So they’re always here, turning
like mobiles, toiling to haul up
the perfect skyline – and spoiling it.

This poem is packed with contrasts that coexist and rub against each other: modernity and tradition, stasis and change, ideals and practicalities, all via the observation of a city that’s heaving with wider historical connotations.

Literary figures from the past play important roles throughout A Postcard To. The poets encounter places on their travels that are connected to dead writers, and consequent, implicit dialogues ensue, such as Henson’s thoughts on Hardy when he visits Dorset and Greening on Browning in Venice, as in the following extract…

…Fame throws its rope towards the landing stage
and misses, falls into the bluey green
oblivion of the Grand Canal, as Robert Browning
departs and leaves his dry son drowning.

Tensions run through this poem, from the missed rope of fame that has ramifications for creators of any genre at any point in history, through to Browning’s success in comparison to his son, all followed by the deeply personal clash of the final three words, homing in on the strains of a paternal relationship.

What turns A Postcard To into a unified collection is the implicit dialogue that’s struck up between the two poets through their shared concerns. The past is portrayed via the personal and the public, both Greening and Henson always very much aware of their individual places in the broader expanse of the passing of time. The reader, of course, is left to wonder how these traditions will be absorbed by the present and the future.

Greening and Henson know that postcards might fall out of fashion, but the need to tell people about our trips, to bounce places off each other, to compare our own stories with those we encounter, is eternal and inherent to the human condition. As such, this collection might seem locked in to specific times and places, but it actually holds the key to opening our minds to universal issues. Just like travel itself.

Posted by Matthew Stewart at 00:27 No comments:

Line length and line endings in the digital age

I've blogged previous about the relative virtues of drafting with a pen, a pencil or a keyboard (see here), so I won't be going over that old ground again today. Suffice to say I prefer a pen, as it enables me to follow the trail back to my first draft via crossings-out, red herrings, dead ends and stuff that seemed useless but becomes pivotal and requires salvaging.

No, today's post takes as its point of departure the fact that many younger generations always write poetry via a keyboard and a screen. Their typing is far more rapid than my two-fingered efforts, and a fair chunk of them don't even own a printer. This last point means that they read through their drafts on a monitor rather than on a piece of paper, of course.

The key issue is whether the above-mentioned shift in writing habits is affecting the way their poetry is functioning. There seem to be two major questions. The first is whether speed of writing encourages lines to be longer, freer, less tense. The pen weighs up every letter before committing it to the notebook, but the keyboard rushes onwards.

The second matter for debate, meanwhile, is whether trends in line endings are also altering. The argument might be that moving a line ending with a pen involves writing the poem or at least the stanza out again (and again). It entails meditated probing as to whether an experiment functions. However, on a screen, the return key encourages the poet to play around with line endings at will, changing and then changing back in a few seconds flat, spotting immediately how semantics and syntax might interact with expected and unexpected line endings.

In other words, my suggestion is that if there's a generalised evolution towards longer lines and more unexpected line endings among younger poets, it might not just be because of their aesthetic tastes but because the actual means by which they write are also different. And this is before even starting to consider poems that might have been drafted on phones...!