The looming shadow of the present, Robert Selby's The Coming-Down Time

When describing Robert Selby’s first full collection, The Coming-Down Time (Shoestring Press, 2020), there’s a danger that critics might reach for terms such as “traditional” or “nostalgic”, particularly as the poet evokes and invokes an England that’s about to undergo a seismic shift.

However, those afore-mentioned terms would do Selby’s work a disservice, as they would misinterpret his implicit contextualising of the past and the delicacy of his touch. Selby’s work rewards patient rereading: poems that might seem a pastiche or anachronism are in fact inviting the reader to engage in a dialogue with the present. In The Coming-Down Time, what’s left unsaid is often even more important that’s what actually stated, and the impatient reviewer can easily miss these nuances.

One such example is The Sycamore. A pertinent comparison would be between the opening lines to the first and final stanzas, which read as follows…

The black-faced smithy’s boy of Brig o’ Turk
propped his bicycle against the sycamore
before his final shift at the clanging hearth,
soon to head to war to escape the bore
of pouring coal into the firepot’s girth…

…Long since the blacksmith sold off the yard,
since war ended, resprouted, withered again,
and the Trossachs became a National Park,
the bicycle protrudes still, a man-made limb
mimicking new growth…

These two extracts clearly mark the passing of time, as individual and social histories are portrayed in parallel, while the natural and human world are also juxtaposed to fine effect. Nevertheless, the poem’s significance pivots around the moment at which its narrative stops. The Trossachs became a National Park in 2002, and Robert Selby is leaving unspoken all the changes that have taken place since then, inviting us to continue with his temporal journey, making it our own, implicitly encouraging us to carry on to the here and now.

In other words, contemporary England might be termed “the elephant in the room” in The Coming-Down Time. Selby is entirely aware of the looming shadow of the present throughout his collection and plays on the knowledge that readers will approach these poems via the lens of 2020 with its new conflicts, tensions and changes.

It might be something of a cliché to state that we must understand the past in order to get to grips with the present and future, but that doesn’t make such an affirmation any less true. As a consequence, The Coming-Down Time is far from being behind the times. In fact, it could barely be more relevant.

Posted by Matthew Stewart at 02:52 No comments:

A second poem in The Spectator...

Just like that old cliché about buses, I've been waiting for years to have a poem in The Spectator and now two have come along in quick succession! 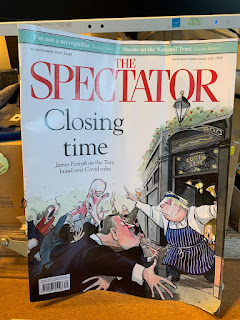 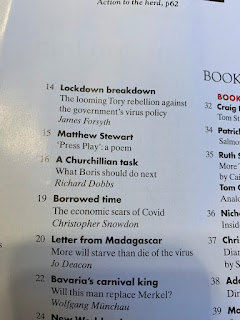 Posted by Matthew Stewart at 07:30 No comments:

Email ThisBlogThis!Share to TwitterShare to FacebookShare to Pinterest
Labels: Poetry, The Spectator

My poem in The Spectator

I'm chuffed beyond belief to report that I have a poem in this week's issue of The Spectator. Thanks to Mat Riches for getting hold of a copy on my behalf and for nudging an earlier draft of this piece in the right direction... 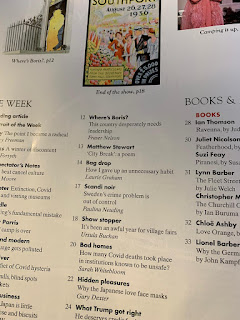 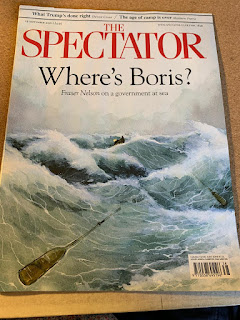 Posted by Matthew Stewart at 10:41 No comments:

Email ThisBlogThis!Share to TwitterShare to FacebookShare to Pinterest
Labels: Poetry, The Spectator

The darkening hue of the years, Richie McCaffery's First Hare

Richie McCaffery is an unusual poet. To start with, his poems are immediately recognisable. And then there’s his commitment to his method. Instead of shedding a skin after every book, reinventing himself for the following collection, he chips away at his concerns. This quality shines through once more in his new pamphlet, First Hare (Mariscat Press, 2020), which builds on the foundations of his previous books, layering them with additional nuances in both aesthetic and thematic terms.

I’ve mentioned in the past that McCaffery is one of the best in the business when it comes to so-called poetic leaps. This device involves the invocation of an object, person or situation, followed by an unexpected, startling comparison with another object, person or situation. The comparison might at first seem incongruous, but poets of McCaffery’s skill render it inevitable and enlightening, thus capturing their reader.

One such instance in First Hare can be found in Lighthouse. This poem portrays a picture that’s hung on a bedroom wall in the first stanza; the second stanza introduces the figure of a sleeping partner; the third then brings both elements together as follows:

…It’s drawn in such a way
to imply that the onlooker
is deep in the eye of the storm.

Larkin might famously and disingenuously have disavowed the poet’s obligation to develop. However, McCaffery does so via deft steps forward in pieces such as Mac, which delivers a complex narrative with several character in eight lines. It’s one of those poems that doesn’t do itself justice via short extracts and it’s not fair to quote it in full in a blog review, so you’ll have to get hold of a copy of First Hare to appreciate the skill that’s brought to the table.

And then there’s also McCaffery’s thematic development. He’s always been excellent at delicate touches of wry whimsy, especially when bringing his poems to a close, but this new work finds him adding the extra tempering qualities of age, the darkening hue of the years that have gone by, as in the closing lines to Sports Days…

…On mandatory sports days I always took pride
in taking my time and if someone fell down,

bloodied their knee I’d stop to help them back up.
She’d be there, cheering me on as I came last.

One of McCaffery’s many achievements has been the gradual accumulation of a loyal readership for his poetry over the course of his earlier books. They won’t be disappointed by this fresh addition, but it’s also ideal for others who hadn’t previously discovered his lucid, clear-cut and thought-provoking work. First Hare will provide them with a perfect snapshot and introduction to his art.

Richie McCaffery speaks to us directly, with passion, with sincerity. He moves us in ways that should theoretically lie beyond the capacity of such accessible words. His poetry is essential reading.

Posted by Matthew Stewart at 00:28 No comments:

Three poems in The High Window

I'm delighted to report that I have three poems in Issue 19 of The High Window alongside the likes of Diana Hendry, Sarah James, Myra Schneider and Richie McCaffery, etc, etc. You can explore their excellent poems by following this link. Many thanks to David Cooke for having published my work!
Posted by Matthew Stewart at 03:48 No comments: