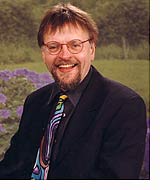 I'm delighted to be featuring a poem by Robert Selby today to mark the launch of his first full collection, The Coming-Down Time (Shoestring Press, 2020). I'll be reviewing Selby's book on Rogue Strands in due course, but for the moment a delicious sample is in order.

The power of this poem resides in its use of pronouns. I'm convinced deft manipulation of the blighters is a sign of a good poet, but this piece reaches beyond normal expectations to create an emotional charge that gradually creeps up on the reader. The third person undermines the second, before both of them overwhelm the first, though I'm not going to reveal any more details at this stage. I simply suggest you read it for yourself to discover what I mean about its subtle impact.

N.B. I'm inserting the poem below as a jpeg image because its line lengths don't lend themselves to the format of a blog and I don't want them to be mangled by the limited boundaries of a screen... 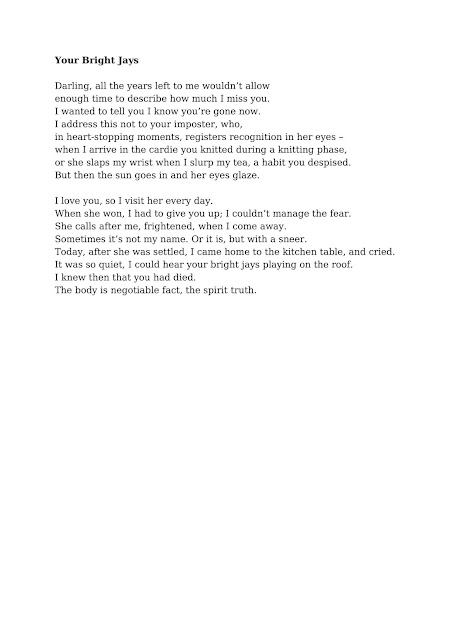 Posted by Matthew Stewart at 00:31 No comments:

Persona Poems: a useful term or a red herring?

I came across this term for the first time the other day and immediately understood what it meant. In other words, it must be a useful label for teachers and tutors as shorthand to refer to poems deliberately written in a voice that’s separate from the poet’s own identity.

However, on reflection, I found myself picking the term apart. All poems, whether their creators like it or not, are persona poems to a greater or lesser extent. In supposedly autobiographical pieces, how much of a persona is projected, either intentionally or unintentionally? And in explicit persona poems, how much or how little of the poet is implicated and involved in their character?

In fact, I’d go as far as stating that a considerable chunk of the genre’s interest lies in the tension that this above-mentioned ambiguity generates. The so-called lyric “I” can be deliciously undermined to great effect…!
Posted by Matthew Stewart at 02:44 No comments:

My essay on Rory Waterman's poetry is now up at Wild Court. In a longer format than my normal blog posts, this piece enables me to spread my wings and get to grips with all three of Waterman's collections, looking at them as a body of work but with a special focus on his latest book, Sweet Nothings. You can read it for yourself by following this link.
Posted by Matthew Stewart at 09:49 No comments:

Point and counterpoint, Charlotte Gann's The Girl Who Cried

I very much enjoyed Charlotte Gann’s first full collection, Noir (HappenStance Press, 2016) and wrote positively about it last year (see here). It was an excellent book, exemplified by its slanted treatment of emotion, relating its characters’ experiences without any explicit evocation of feeling, drawing on a cinematographic approach to do so.

However, this first collection’s value is now further magnified by the publication of her second, which is also excellent, titled The Girl Who Cried (HappenStance Press, 2020), and by the poet’s provision of a counterpoint to her previous book in terms of aesthetic technique. In her new work, Gann comes at the same subjects of human relationships face-on rather than from an angle, thus initiating an implicit dialogue between the two manuscripts.

The Girl Who Cried throws off the masks and filters of the cast that was portrayed in Noir. Instead, it’s packed with intimate psychodramas that barely invoke outside elements. The poems are without titles, flowing or bumping into one another, offering us yet more points and counterpoints. They play off against each other. They inform each other. And this is why the absence of individual titles works so well.

One striking aspect of Gann’s shift in method is her move from an extensive cast of character in Noir, which included many poems in the third person, to a predominance of poems that revolve around first and second-person pronouns in The Girl Who Cried. In her new collection, the pronouns’ pivotal role is their fluidity from one poem to another, leading to reader to question identities and potential narrative threads. Moreover, they even undermine themselves on purpose within specific poems, such as in the following instance:

…And I see me. Bleak, brittle,
almost ridiculous,
and mauve with loneliness.

These subjective, supercharged adjectives and the use of the emotionally significant abstract noun are both examples of Gann’s change in approach, while the disconcerting deployment of both the subject and object first-person pronouns within a single sentence issues a challenge to any accusations of a confessional approach. Her technique implies that there’s an observer in the background throughout these poems, dipping in and out of events, as in this extract…

Being on the phone with you

is like skating on ice –
or rather, watching an ice skater…

In the above lines, Gann’s first-person narrator switches from protagonist to observer, highlighting the shape-shifting nature of experience, invoking the dislocation and alienation that can be caused by extreme emotion.

The Girl Who Cried is an excellent collection in its own right. Nevertheless, its significance grows further when placed alongside Noir. The two books not only provide us with two contrasting yet complementary perspectives on a similar subject, but they also enable the poet to burrow more deeply into her inspiration, developing new angles via those previously mentioned points and counterpoints.

Furthermore, Gann invites us to reflect on the validity and coherence of choosing different poetic methods to deal with similar themes, showing us that her doing so can actually enrich our reading, contributing greater nuance and understanding. The process of handing ourselves over to her work allows us to reflect on the nature of human experience and on poetry’s wide-ranging potential to express it. Why not find out what I mean for yourself…?
Posted by Matthew Stewart at 07:28 No comments:

I'm very pleased to report that I've got two new poems in issue 35 of Poetry Salzburg Review alongside work by the likes of Hilary Davies, John Greening and Richie McCaffery, etc, etc. You can find out more at the Poetry Salzburg website (see here).
Posted by Matthew Stewart at 12:25 No comments: