When I was chatting to my friend Mat Riches the other day, he reminded me of the comparisons and contrasts that we could make between the likes of George Kendrick (whose poetry was the focus of my latest essay on Wild Court) and the likes of Maggie O'Farrell (whose poems from the 1990s have featured recently on my Twitter feed).

If the former might fit into a category of forgotten poets, then the latter could well be included in a separate grouping for poets who forgot about poetry. In O'Farrell's case, she abandoned verse for prose in the shape of the novel, although she did so at a far earlier stage in her literary development than many others. However, I get the feeling this journey has been made by several well-established poets over the past few years, and I wonder about their motives: artistic, financial, size of canvas, readership...? Moreover, I don't often see them making a return trip. Or am I wrong...?

When John Greening posted on social media the other day that Harry Guest had died, I was taken aback to note that the news didn't then spread far more widely.

I'm not at all qualified to write an obituary of any sort, but I do know that Harry Guest was a significant figure in British poetry who published with Anvil/Carcanet and was widely anthologised. In fact, I even have a battered copy (picked up from an Oxfam shop in the early 1990s) of the Penguin Modern Poets that featured his work... 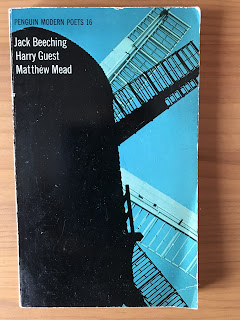 In other words, his passing seems to me to be yet another example of the ephemeral nature of poetic fame. Of course, as Bob Mee mentioned on Twitter, the poets who "disappear" are often among the most interesting to read.

Posted by Matthew Stewart at 02:10 No comments:

Now that Eleanor Livingstone’s stint as Director of StAnza is coming to an end, I’m sure there are many people who are better qualified than me to provide an overview of her long-term contribution to the festival’s development.

However, as a poet who read at StAnza in 2019, I just wanted to put on record my thanks to her. During my days in St Andrews, I was struck not only by the scale of the event and by the countless details that were required to ensure its smooth running, but also by Eleanor’s capacity to pause and treat every individual poet as a person. Moreover, her love of the genre shone through at all times. It’s no exaggeration for me to state that she played a huge part in making StAnza a magical experience.

In other words, thank you, Eleanor! I now hope you get to enjoy the festival from the other side of the fence (and without quite as much stress) in 2022…!

My essay on George Kendrick's poetry is up at Wild Court today. Here's the opening paragraph to give you a flavour of the piece...

Let’s take a forgotten poet who went from publishing with Carcanet, garnering a PBS Recommendation and receiving excellent reviews in the broadsheets in the process, to barely appearing in Google searches for his name. Let’s chuck in an almost cinematographic biography with enough intriguing details and mysterious gaps to set a screenwriter’s pulse racing. Let’s top it with off with a dedicated small publisher who’ve finally managed to bring together a Selected that’s taken from an unpublished manuscript and a generous wodge of work from the first book. Let’s assume his work must have been neglected for a valid reason, and let’s guess that the poems themselves probably aren’t much cop when we read them decades later. Except they are. In fact, several of them are outstanding and deserve a place at the top table of 20th century UK poetry...

You can read the rest by following this link.

Posted by Matthew Stewart at 08:40 No comments:

A few days ago, I asked Twitter whether the expression Full-Time Poet is a contradiction in terms. The wide range of replies was fascinating.

Some people homed in on the cash, as in the need for an inheritance or a high-earning partner if somebody wanted to devote all their time to writing. This suggestion, in turn, garnered responses from others who understood Full-Time to be a synonym of Professional. In other words, certain poets do view themselves as Full-Time in the sense that their professional lives revolve around poetry: its teaching, its workshopping, its reviewing, etc, which also combines with their own writing. The counter-argument, of course, is that their workload means that they might not have much time or energy left for actual creation of the genre, meaning that they’re anything but Full-Time in one sense but completely committed in another.

And then there’s an alternative take, which is implicit in my loaded question. This involves questioning whether poetry is improved by spending eight hours a day at a desk, trying to write, draft and re-draft the stuff. It wonders whether the creation of poetry’s not better served by other stimuli, be they sleeping (!), drinking or doing a job that has nothing to do with poetry whatsoever. Moreover, this issue connects with a false dichotomy between so-called Amateur and Professional poets, as if the origin of a person’s earnings were to dictate the artistic value of their creation. On both sides of this absurd debate, there seem to be delicate egos.

For what it’s worth, my own perspective was brought into focus by my wife when I mentioned this issue to her. She innocently remarked that if I stopped talking to her in the car because I was mulling over a stanza, or if she found herself waiting by the door, shopping bags in hand, because I’d suddenly had to jot down a line in my notebook before we left for the market, then I was most definitely a Full-Time Poet myself. In other words, the term might well be applied to anyone who writes in the genre. This is down to the fact that our creative process is alive, both consciously and subconsciously, in our heads and hearts, throughout the day and night. We never stop being poets, starting to write our poems long before we put pen to paper…

Posted by Matthew Stewart at 01:12 No comments:

Emotion transformed into art, Wendy Pratt's When I Think of my Body as a Horse

Wendy Pratt’s new collection, When I Think of my Body as a Horse (Smith-Doorstep, 2021) is not only brave and ambitious in its thematic scope and aesthetic approach, but also achieves an astonishing degree of humanity, coherence and cohesion.

Pratt takes received formats by the scruff of their necks and lifts them out of their expected usages, such as in the case of Two Week Wait. At first sight, it seems a supposed, so-called list poem, beginning with a conventional couplet and starting three of its first six lines with a repeated form (love + verb + and`+ verb), as follows:

Love turned the dial up
and watched us burn.
Love caught us like frogspawn
and cupped us in the light
of a duck egg blue day…

This technique creates the effect of a chant, lulling the reader into a false sense of syntactic security. However, Pratt quickly changes gear as the poems moves forward, piling up irregular line breaks, then two clauses per line, then a foreshortened final line…

…Love was needles and charts
and scans, love was clinic visits
and operations, love riddled us
with drugs, love shook us with hope,
love gave us you, love lost us both,
love lost us all.

Via her subverting of a list poem, Pratt rips away an initial incantation and transforms it into a wail, into a heartrending lament.

The above poem is also an excellent instance of the deft use of repetition that crops up throughout this collection. Sentence and line structures mirror each other up to a pivotal point where they suddenly diverge in meaning, highlighting those contrasts and differences. Here’s one such example from Nesting…

I was giddy with instinct. I wanted
to pull bits of my new wild world
into my bedroom. I wanted
to open the window and jump out,
onto the back of grazing sheep
and pull their wool out. I wanted to use
my own spit to shore up the pebbledash
of our ex-council house…

This extract juxtaposes the natural and the manmade, the human and the animal, all via the afore-mentioned device of twisted repetition, drawing out the tensions and unifying forces between them, just like in the following lines from later on in the same poem…

…I was afraid of the sheer witch craft
of my body, my poor body and its need
to nest, my animal body and its unformed hopes…

In this case, layers are placed on top of the initial construction: my body becomes my poor body and then turns into my animal body, implicitly highlighting the crucial importance of the link between animal and body. This is a theme that’s of utmost significance to the poet’s understanding of her own being and of the world it inhabits. Furthermore, by extension, it’s just as fundamental to our reading of the book as a whole.

Posted by Matthew Stewart at 03:30 No comments:

Email ThisBlogThis!Share to TwitterShare to FacebookShare to Pinterest
Labels: Smith-Doorstep, Wendy Pratt, When I think of my Body as a Horsae
Newer Posts Older Posts Home
Subscribe to: Posts (Atom)