Tasting Notes, my forthcoming HappenStance pamphlet, allows the wines that I blend to speak for themselves. More about them in the next few days. However, it also deals with how wine matches with food. In that respect, one of my personal favourites is a glass of decent red from Extremadura with some of the local ham.

Ham from Extremadura is the best in the world. Forget about that Italian stuff (cry your eyes out, Parma!) or even Guijuelo or Jabugo in Spain. An acorn-fed, free range, on-the-bone Ibérico ham from Extremadura is unbeatable. Ibérico is the local breed of pigs, offering up delicious, marbled fat. Cut wafer-thin, it just melts on the tongue!

Fair enough, you might say, but why isn't it world-renowned, sold in the best restaurants and talked up by glossy magazines? Well, it certainly is making a major name for itself among foodies, but marketing has long been one of Extremadura's failings.This is maybe because of the old farmers' mentality in what is one of the poorest and most remote regions in Spain - Extremaduran people were just glad to get a good price for the animals at slaughter, letting companies from other parts of the country cure their hams, create brands and thus an image.

Nevertheless, things are now changing. Ham from Extremadura is now served at some of the top London restaurants. Moreover, it's coming to a poetry reading near you very soon for the price of a chapbook, together with a fair whack of that red wine I mentioned above. This is going to be a launch with a difference!
Posted by Matthew Stewart at 23:49 4 comments:

The emergence of any new poetry blog is to be welcomed, especially one that concentrates on reviews, but John Field's Poor Rude Lines displays a quality of writing and insight that already make it remarkable. His pieces are clearly underpinned by the experience of academic essay-writing, yet they also manage to be accessible to general readers, succeeding in striking an extremely difficult balance.

In the context of the above, I'm very grateful to him for having featured Inventing Truth, and for having been so generous in his praise. You can read the article here. I've included Poor Rude Lines in the blog list that runs down the right-hand side of Rogue Strands, and I'll be following its development with a keen interest.
Posted by Matthew Stewart at 08:29 No comments:

London Grip have just published their Autumn 2012 issue of new poetry. It's packed with interesting verse from the likes of Pippa Little, Angela Kirby, Mike Barlow and many more. You can read it here, where you'll also find a poem by me. Titled The Club Player, it's a playful contemporary counterpoint and contrast to Betjeman's lines on a certain lady...

This is a shot of the cover for my new HappenStance pamphlet, Tasting Notes: 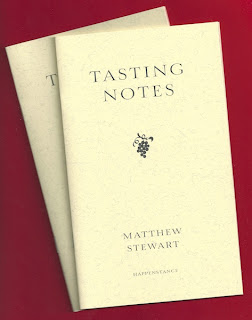 More news to come in the next few days about how and when you'll be able to get your hands on a copy, plus details of a slightly unusual launch that we've been planning...

Cooking and writing are two of my favourite activities. Both are creative processes and both end with the release of the finished product, allowing others to interpret it. These endings do, however, display one key difference: reading a book is an individual activity, often months or years after its creation, whereas a dish is usually shared immediately.

Maybe that's why I love Antonio Gamoneda's poem, Sabor a legumbres, so much. A terrific portrayal of a family meal, it finishes as follows:

...I feel
in the crushed silence
something wonderful:
five human beings
understanding life through the same taste.

I can't imagine life without the enjoyment of food, its preparation and the sharing of it. So many specific moments and people are intrinsically linked in my memory with a certain dish. My poetry often reflects this love of everything culinary, bringing cooking and writing together in a celebration of each other.
Posted by Matthew Stewart at 09:21 1 comment:

Here's a date for your diary: this year's Poetry Book Fair will be held on Saturday 8th September at the Candid Arts Trust Galleries in London. You can already view the extensive list of exhibiting publishers on their website, with the full programme of readings to come in the next few days.

I'll be attending and participating with HappenStance, bringing a couple of surprises with me! More details in due course...
Posted by Matthew Stewart at 01:33 No comments:

Maria Taylor is a poet with a keen sense of identity. By that, I don't mean that she's fond of attaching labels to herself. In fact, the opposite is true - she's only too aware of the shifting, ambiguous nature of identity, and her verse does an excellent job of exploring its vagaries.

Her first full collection is titled Melanchrini (Nine Arches Press, 2012), in itself a word - meaning "dark-featured young woman" - that hints at one of the book's main concerns. This is British poetry with a Greek Cypriot background. Copellas and levandes are juxtaposed with a park off the Uxbridge road, Pebble Mill and a dance at the Palais Hall.

Taylor explores the co-existence in her upbringing of two languages, two cultures and two set of social attitudes. At times, her husband is "English", at others "englezo", his acceptance into her family under scrutiny, as she portrays the blending and clashing of British and Cypriot ways of life. This double perspective undoubtedly enriches Taylor's writing, enabling her to write about both countries with a critical eye. She acts simultaneously as an insider and outsider.

The extra counterpoint is crucial to the development of Taylor's skill at exploring the ambiguous qualities of identity as mentioned above. In that respect, Kin is a key piece:

"...You won't need a passport or papers,
there will be a glint in your eyes
which is recognised or understood...

...remember
there was no second or third country,
just a place where people came from,
where once before maybe you did too."

This poem begins in an authorative tone, identity being clearly above mere documents. By the end, Taylor is purposely undermining all that came previously. The "maybe" of the final line is reminiscient of the "almost" of Larkin's An Arundel Tomb.

Melanchrini stands out among first collections for its coherence. Maria Taylor's achievement lies in having generated a deeply personal thematic and poetic drive that runs throughout the book. I very much recommend it.
Posted by Matthew Stewart at 08:50 No comments:

Julia Copus in The Guardian

I've been catching up on my reading after a couple of weeks away, and especially enjoyed Julia Copus' feature in The Guardian a couple of weeks ago on "the joy of siblings". That might be a slightly naff editorial turn of phrase, yet the article is anything but, telling the story of her relationship with her brother and sister amid the collapse of their parents' marriage.

The piece is located in a section titled Life and Style, although it closes with Copus' poem, The Back Seat of my Mother's Car. I already knew and admired this poem, but its impact is greater here. What's more, casual readers (not just those who browse Guardian books) will have encountered excellent verse, all in the context of the preceding prose. This is just what's needed if poetry is going to attract new readers. A definite thumbs-up!
Posted by Matthew Stewart at 00:14 No comments: