Reading with Carrie Etter at Words & Ears in Bradford on Avon

On Thursday 28th January, I'll be reading as guest poet alongside Carrie Etter at Words and Ears. The venue is the Swan Hotel in Bradford on Avon. Words & Ears is a highly successful, monthly event, and I'm very grateful to the organiser, Dawn Gorman, for the invitation. If you're in the area, I do hope you'll come along: open-mic slots are available, while the entry fee is only three pounds.

Carrie will be reading from her friend and student Linda Lamus' book, A Crater the Size of Calcutta, which was published posthumously by Mulfran Press, while I'll be reading from both Inventing Truth and Tasting Notes, Stephen Payne having very kindly agreed to help me out with the second voice in the latter pamphlet. Of course, both chapbooks are officially sold, but I'll be bringing along a few of my last-remaining copies for sale on the night.

More details can be found on this poster for the event: 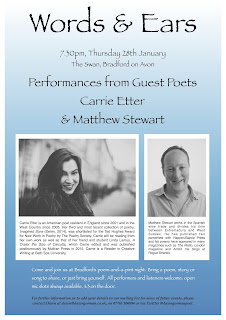 While I was preparing my set for a reading next Thursday in Bradford on Avon (more details in the coming days), my attention was drawn to an interview on Rob Mclennan's blog with C.D. Wright. It dates from 2010, but was posted on Facebook in the light of her recent death. I very much recommend you read her poetry itself, which is unusual and intriguing, but for the moment here's a quote from that afore-mentioned interview about poetry readings and the difference between hearing and listening:


"Readings are social. They terrify me, but I do love the contact. I am not the best listener. When I attend a reading, it is not to listen, but to hear and to see someone render their words physical. When I want to listen to them, I sit down with their words in private. Listening is not social."

My poetry and wine on Spanish television

A couple of months ago I was approached by Canal Extremadura, the regional T.V. channel in this part of Spain, with a view to being featured in a new show called "Un lugar para quedarse". After some initial misgivings, I agreed, and it was broadcast last night.

The format entails telling three people's stries of how they ending up living in Extremadura, interweaving each narrative thread. I appear in three separate sections. Firstly, I'm shown in the vineyards around Almendralejo, talking in Spanish about my early life in the U.K. and my move to Spain, and reading a poem about it in English  (01252 722698, from Inventing Truth). The second section, meanwhile, focuses on my working life at Viñaoliva, with interviews with me and footage of the winery. The final section concentrates on my current life in Almendralejo and my recent poetry, also including another poem in English (Extranjero, from Inventing Truth).

Here's the programme on the Extremaduran version of the i Player, where you can watch the whole thing or simply fast-forward to the three sections that feature my poetry and wine. It would be good to know what you think!

Maria Taylor in The Manchester Review

Maria Taylor's first collection, Melanchrini (Nine Arches Press, 2012), was excellent. However, she's stepped up her game still further since its publication. These days, there's an immediate surge of anticipaton whenever I spot a new poem by her in a journal. Moreover, her work has developed to such an extent that it's now highly distinctive in texture, tone and emotional impact.

For all the above reasons, I very much recommend you read her two pieces in Issue 15 of  The Manchester Review. While you're there, why not also have a look at other excellent poems by the likes of Roy Marshall and John North?
Posted by Matthew Stewart at 07:52 2 comments:

We all tend to lean on our prior knowledge when encountering something new. Just as a British wine aficionado might think of Cabernet Franc from Chinon in France while tasting Mencía from Bierzo in Spain, so poetry readers are immediately reminded of predecessors while discovering a poet. We have to fight off these natural tendencies, as they limit our capacity for interpretation and for embracing fresh frames of reference. Moreover, they also encourage lazy critical shorthand from the reviewer.

As a consequence, it’s extremely dangerous for a new poet themselves and/or the blurb for their first pamphlet to embrace just such an approach from the outset. One case in point is Siegfried Baber’s When Love Came to the Cartoon Kid (Telltale Press, 2014). Not only does the title itself offer up an obvious allusion, but the blurb states “Baber sets down his impressive marker: an Armitage for Generation Tweet.”

Such pigeonholing does Baber’s verse a huge disservice. His best poems have the courage to admit an emotional vulnerability far beyond Armitage’s youthful posturing. He’s far less flashy, far more reflective than Armitage was at a similar age. One such example is “A Few Phobias”, which ends as follows:

“…months from now, fear of finding your books

lost between mine. That favourite dress
clinging to my clothes like gossamer.”

The above quote shows Baber’s eye for an image, while also underlining how he harnesses this flair: each arresting turn of phrase is never there just for the sake of it. Furthermore, his homing-in on deliciously judged details sustains his narrative, ensuring its light-footed yet condensed clarity.

Of course, there are one or two occasions when Baber doesn’t quite pull off his poetic leaps, times when he aims too theatrically for a certain denouement. However, even these partial failures are successful in many ways, providing signposts to his development.

The key now is how Siegfried Baber uses When Love Came to the Cartoon Kid as a launching pad for his writing. One or two of the weaker pieces in this chapbook draw on the detritus of popular allusion to lesser effect, but the above-mentioned stronger poems seethe with an idiosyncratic, honest poetic talent that just needs to learn to trust itself and its readers.

I’m sure Baber will very soon get the chance to publish a full collection. I hope he holds back a couple of years longer until he’s got a book that will really take our breath away. I’m already looking forward to it, but the best things in poetry often need to wait.
Posted by Matthew Stewart at 07:54 1 comment:

Email ThisBlogThis!Share to TwitterShare to FacebookShare to Pinterest
Labels: Siegfried Baber, Telltale Press, When Love Came to the Cartoon Kid

Throughout a lot of verse, or at least the verse I love to read and try to write, poetic leaps are crucial. In fact, the success of a poem often hinges on whether its pivotal syntactic leap makes to the other side of a semantic abyss.

By my use of the term "poetic leap", I mean a connection that must be unexpected, revelatory and inevitable once made, just like line endings in syllabics, just like word order, just like poetry, full stop.
Posted by Matthew Stewart at 13:12 8 comments: